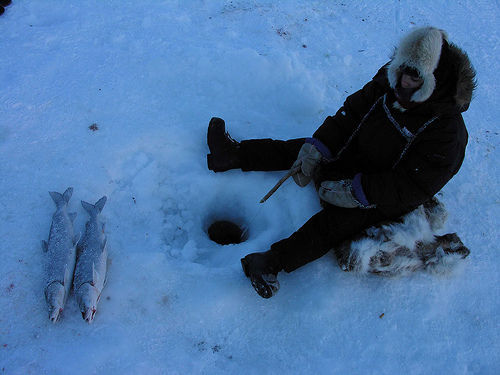 “I do not consider myself a remarkable person. I am just a guy with a very large bump of curiosity” – Clarence Birdseye

Birdseye is synonymous with frozen foods but what I didn’t realise until yesterday was that Clarence Birdeye began developing his fast freeze process after observing how the Inuit preserve their fish through the winter. An innovation based on observing how an expert goes about their work. I like that.

Fast freezing only allows small ice crystals to form so that the cell walls remain intact and the peas (for example) aren’t mushy (different kettle of fish) when defrosted. Clarence Birdseye saw the possibilities of this when he was working on the Canadian peninsula of Labrador. He saw how the Inuit caught fish from ice holes in the winter and then laid the fish on the ice. The combination of the ice underneath and the cold air temperatures (down to -40°C) caused the fish to freeze almost immediately. When this fish was defrosted and eaten it tasted almost as good as when fresh whereas other commercially available fish was frozen over a period of 18 hours and tasted dry and tasteless.