The Rugby world is growing increasingly aware of the effect of head injuries on players long term health so N-Pro determined to create a product that could reduce the risk of head injuries.

We helped N-Pro to realise their concept, developing the protection technology they developed into a cost effective, manufacturable product. We sourced the suppliers in the supply chain and helped overcome many hurdles to getting this product launched.

Following a long political campaign to compete internationally, Shirin was about to be denied permission to represent Iran in a triathlon unless she wore an approved outfit which was restrictive, hot and required a tent for changing. In a day and age where the majority of Western sports kits are figure-hugging and minimal, we helped Shirin reimagine her kit with thoughtful design and some of the coolest textiles available.

When Shirin approached us just three weeks before the ITU world championship race, she had ideas for a new sports outfit that was lightweight, breathable, and concealed her hair, skin and silhouette while she transitioned between activities in line with the Iranian Ministry of Youth Affairs and Sports’ modesty requirements.

We researched these requirements and worked together to explore different garment combinations that could be interchanged depending on the activity. Once we’d sourced technical textiles that were lightweight, breathable and suitable for printing, we created toiles (prototype garments), produced artwork, and constructed the final kit in a very short time frame.

The final kit, consisting of a printed cycling jersey and loose overshirt, enabled Shirin to change between activities without the use of a tent. Discussing her redesigned outfit, Shirin said, “They were comfortable, they looked awesome, they were easy to bike and run in and at no point in time did I wish I had a layer less.”

Shirin finally received permission to race on the morning of the event, a historic moment which marked her as the country’s first ever female triathlete to compete in the world championship. 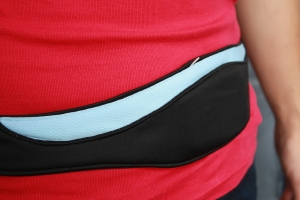 Our close relationship with the design team at KD, combined with Thread’s prototyping expertise means that the design intent of these medical devices is carried through the design process to manufacture.

Thread sources materials from around the globe. The textiles used in these products must meet the stringent requirements of a medical device. We have links with manufacturers that produce quality materials with very low chemical content, making them suitable for medical applications.

We support designers and engineers to ensure that the products they envisage are realised. Where their vision is not realisable we are able to help them to alter their vision or generate new designs that meet the design intent.

Hand carved cosmetic covers for artificial limbs, worn as standard by many amputees are loved by their wearers, as they attract less attention than the high-tech limbs that they disguise. However, these soft sculptures get chewed up by the limb mechanism in use. Repeated knee bending, donning and doffing compound the damage, so wearers must frequently return to the clinic for replacements. A design change was needed.

A joint project between the University of Strathclyde Department for Design, Manufacture and Engineering Management and Blatchfords was looking to solve these problems, and approached Thread for input.
Thread joined the teams, and helped realise this goal and improve realism and comfort for the wearer.

Through a series of multidisciplinary workshops we identified ways to solve multiple problems that were damaging the carved foam inner and costing the NHS and users time and money.

We considered the users, clinic environment, materials and construction, and made and tested many prototypes. The solutions we helped to implement were simple and very effective at multiplying the life of the foam component.

In the process we identified a way to dramatically improve the realism of cosmeses though the introduction of a kneecap component, and make the cosmesis easily removable by the user for activities, maintenance and battery charging.

The new design has a dramatically increased life, and looks more realistic. It requires a minimum of training and additional components for the prosthetic technician who builds it.

Thread’s in house prototyping allowed rapid iteration and creation of prototypes to test and prove ideas and processes before they were put into trials with prosthetic technicians.

All this leg work can save time and money for users and NHS alike.

Mamascent™ is a bottle attachment that recreates the sensory benefits of breastfeeding for bottle-fed babies. It consists of a pad that becomes infused with the smell of the mother. A petal from the pad can be attached to a bottle to calm and comfort baby during bottle feeding.

Thread assisted a joint venture between Idus Consultancy and Crib Gogh in developing the design of portable power systems for defense, adventure and consumer users.

Besides developing numerous iterations of tent mounted designs for forward operating bases, consumer and adventure systems, we sourced and identified high spec adhesives to use in bonding the solar cells and sealing the electrical contacts.

The pelvic cradle is a soft support. It is used with Leckey’s seating systems to help improve spinal and pelvic alignment. The design allows mprovements in the user’s posture which have a huge impact on their quality of life; ranging from improved head posture and so ease of interaction with others through to improved appetite and therefore energy and strength. These things can be life-changing.

Leckey wanted to improve ease of use and develop the product’s aesthetics so that it would stand out.

In a multi-stage project, Thread worked closely with Leckey’s design and research team to develop the product, and then coordinated with the production team in the factory hand over the design for production.

The Leeway was launched in 2013: read more here